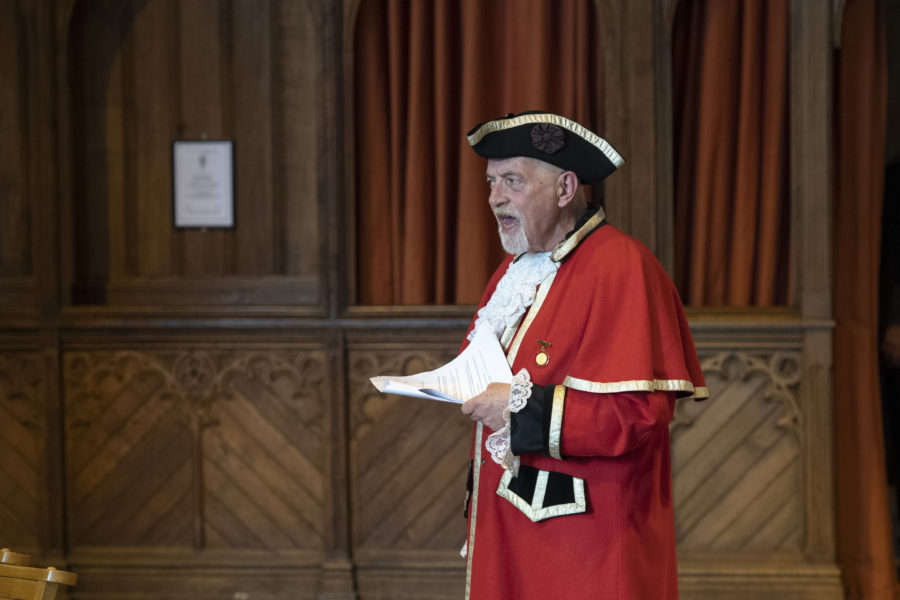 Richard Brookman is Leominster’s Town Crier. He is a member of the Ancient and Honourable Guild of Town Criers.

A Town Crier is a person employed by a town council to make public announcements in the streets. The uniform is elaborate, a tradition dating back to the 18th century, a red and gold robe with white breeches, black boots and a ticorne hat.

The carry a handbell to attract attention and shout the words “Oyez, Oyez, Oyez!” before making their announcements. The word “Oyez” means “hear ye!” which is a call for silence and attention. The Town Cryer ends their announcements by proclaiming “God Save the Queen!”

If you wish to book our Town Crier for your event, please Contact Us 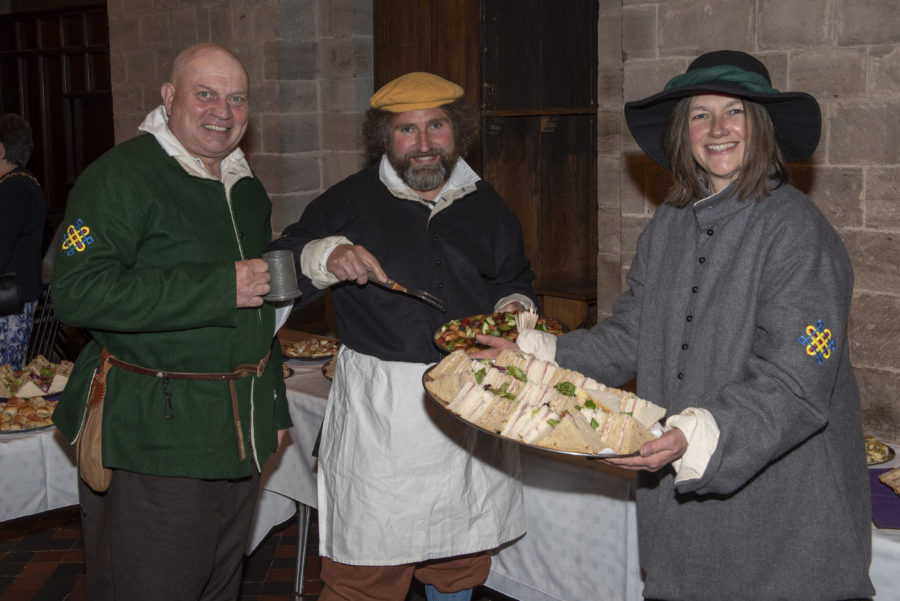 These were important roles in the history of the market town. In the Sixteenth and Seventeenth centuries, these roles would ensure that the produce for sale at the towns market was of high quality, fit for consumption and not counterfeit.

The historic roles were reintroduced in the Summer of 2015 and are currently held by John Stirling as Fish Taster, Gill Bullock as Bread Weigher and Alan McEwan as Ale Taster.

The trio regularly appear at town events, including the Leominster Food Fayre and the Victorian Street Market. 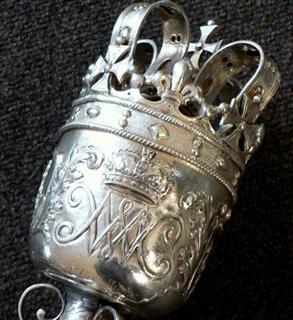 A mace was, historically, a heavy club, usually having a metal head and spikes. Maces were carried by macebearers when in procession with the Mayor and used to defend the Mayor from attack from brigands and the like. In Leominster today, the maces are carried by two mace bearers and a sergeant-at-arms, when accompanying the Mayor on civic duties but the role of both mace and macebearer is now purely ceremonial! Brigand bashing is a thing of the past!

Early records show that in 1618, Sir Thomas Coningsby gave two maces to the town ofLeominster, and in 1646, Fitz-William Coningsby gave a silver mace to the town. No record or trace of these maces remains today.

The present two silver maces were given to the town in 1723 by the Right Honourable Thomas, Lord Coningsby There is evidence of a receipt for the delivery – “October 10th 1723. Paid, John Pearse for bringing down the Macys. 16s 6d” [Williams].

The handle of each one is 21 inches in length and divided into three compartments by a raised circular boss. The portion between each is tooled with oak leaves and acorns. The summit of each mace is surmounted by a large Imperial Crown and underneath the canopy of the crown are the Royal Arms of William and Mary in relief.

Around the circular margin are the letters W and M interlaced and forming a kind of knot; alternate with the Conyingsby arms (3 conies serjeant on a shield below a Baron’s coronet); and with a Lion Rampant (on a shield) bearing in its paws a fleece, with the words “Leominster Burgus”.

The following words are also engraved on the circle of the crown – “The Gift of the Rt Hon. Thomas Lord Conyingsby to ye Borough of Leominstre”.

Although the maces were given to the town in 1723, they were almost certainly made at an earlier date. They bear the Baron’s not the Earl’s coronet. Coningsby was made an Earl in 1719, indicating that the maces were made before then.

The letters W and M refer to William and Mary (1689 to 1702). Mary died in 1694. This indicates that the maces were made between 1689 and 1694. The late presentation of the maces to the town was apparently due to a disagreement between the Coningsby family and the Town Council over a land issue. [Townsend].

The maces are now stored in a bank vault for safety.

This is a plain black ebony stick, 51 inches in length and 1 inch in diameter. It is void of ornament but tipped with a band of silver 4.5 inches in breadth at the top, with inscription “Ex Dono Edward, Freeman Recordat, Burgi Leominstre, Anno Dom:1659”.

The Mayor carries this wand at civic ceremonies today.